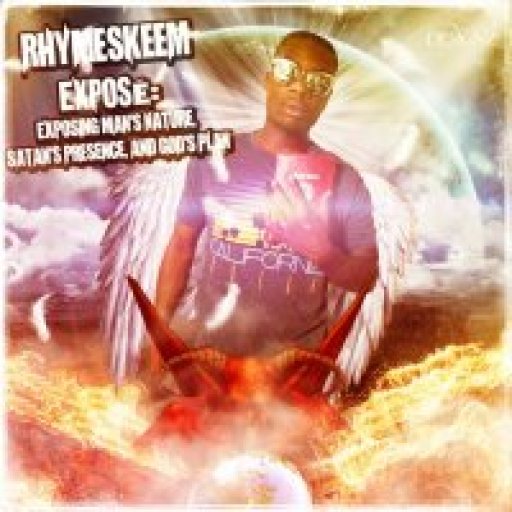 RhymeSkeem was born in Phoenix, Arizona to Nigerian born parents. He moved shortly after he was born to Queens, New York. After a couple years he moved to New Jersey where he spent most of his years growing up in Orange, Clifton, and finally East Brunswick. Right now he resides in El Paso, TX.

As an African American child, RhymeSkeem spent his childhood in a residential neighborhood and went to Catholic schools until he entered the 8th grade in an effort to keep him away from the harsh realities of his surrounding environment. As a result he was frequently called a white boy or an oreo by everyone all though middle and high school because he did not live up to the prevalent stereotypes of the "average ghetto black kid" and spoke with good grammar.

Unlike most people who had not had the opportunity to get to know Jesus at an early age. RhymeSkeem grew up with a very godly mother who kept him bathed in scripture and solid doctrine. However, after high school and upon entering college he had backslid into the ways of the world. Experimenting with drugs and trying to find himself, he was a very lost sheep. He became what he hated most, a Christian who talks the talk but doesn't walk the walk. However, during his 3rd year in college, a midst the 2011 end of the world hype that was abound, he realized that Jesus could return at any second which convicted him to return back to the Father. Upon further reading of the Bible, he realized that what he was looking for was with him the entire time. He realized the truth that exists in the Bible that leads to the very truth of Jesus Himself satisfies what the rest of the world's philosophies had failed to do.

RhymeSkeem started rapping in 2006 with Lady Til as a hobby. When he went to college in 2008, he started making music with LoveMusiq and Chris Styles. Upon moving to El Paso in 2009, he linked up with $on$et (Oz, Aubrey Mikel, and Ye$a) who helped to further help him grow as an artist.

Now with a renewed and transformed mind, RhymeSkeem hopes to use music as an instrument to reveal the truth to as many as are willing to listen in an effort to expose false ideologies and dangerous lifestyles that are detrimental to young viewers. He hopes to spread the truth of Jesus Christ in a world full of hate and prejudice. Music is capable of influencing any listener to do whatever the message embedded in it suggests for them to do. Unfortunately it is bombarded with too much vain, egotistical, and negative content mixed with a general attitude that denies the gravity of the very musical influences they allow to transform their minds. RhymeSkeem hopes to be one of the many shining lights in an effort to illuminate positive influences everywhere he can.