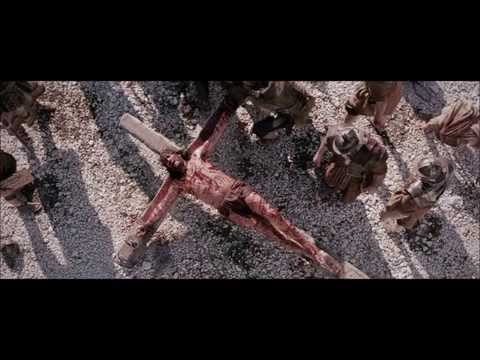 All images are copyrighted to "The Passion of the Christ" and their respective owners.

This song was inspired by the second last word of Jesus on the cross to the penitent thief. It is from the thief's perspective, pleading with the other thief to believe Christ.

Stop with the disdain that you hurl (Luke 23:39)
Know how His days have unfurled, before this Place of a Skull (Mark 15:22)
With a plot, they opposed Him (Matthew 26:3-5) and He not once bemoaned
They brought Him to those at odds with what He taught to the folks (John 18:12-14)
Yelled to crucify this Man whom they awfully loathe (Luke 23:20-23)
I heard He said He would die (Luke 18:31-33; Matthew 17:22-23, 26:2), His followers thought that He won't (Matthew 16:21-23)
Thought their Messiah would free them; now on the cross we behold
And treat Him like He's already dead, casting lots for His robe (John 19:23-24)
The people stop and they joke, Him they watch and provoke
To come down from the cross, to see Him drop so they know
That He's the Christ that God chose (Luke 23:35), I look on surprised how composed
He is, agonized as He groans, even despised by His own
I was in the rowdy crowd, all cheering for flogging
Now the shouts continue, I'm overhearing them talking
Everyone nearing His cross is... jeering and scoffing
With the rulers and soldiers, all sneering and mocking (Luke 23:35-37)
Screaming demeaning words, blaspheming, wagging their heads
At His feet, a small group's mourning, all others are laughing instead (Mark 15:29-30)
They're all looking, but not seeing (Matthew 13:14-15), He's rejected for not leading
Them into peace and freedom, believing He's caught deceiving (Matthew 26:63-66; Mark 14:61-64)
Seeming He riled up false hope, I reviled Him also (Matthew 27:44)
Until it hit me and I noticed how vile and how cold
They act to a dying man; like them, you're an impious wretch
Do you not fear God, having the same judgment? Your demise is next! (Luke 23:40)